Let’s talk about use cases!

Everytime I play something, it differs slightly from previous times. I’m usually play guitar while experiencing a specific feeling, or mood. I think that’s part of my problem with recording; it’s so final. Partly because of having high standards, but also due to authenticity. Is the way it sounds on tape really what I felt at the time? Am I ”lying” to improve the sound for someone else?

I think I’d like to have the option to create a song and have it be different each time. I don’t mind recording several versions, that’s usually how it goes anyway. I love listening to the song performed by different artists. My absolute favourite song of all time has to be Teardrop by Massive Attack. Until I heard the cover by Aurora. I didn’t think it was possible to improve upon that song, but I was wrong. Imagine just wanting to play that song, and sometimes getting to hear version A, and sometimes version B, and the choice is not based on where you click.

A complete cover might be too extreme of an example. Once again I’m gonna show my my short playlists of 5 takes of the same song. They are as similar as I could make them. I’ve just tried to change up how the guitar plays, it ranges from finger-picking to strumming with my thumb, strumming with nails, increasing in intensity.

I want to make excuses of the quality so no-one thinks this is a final edit. I just wanted to create something quick to make it easier to discuss solutions.

No need to reinvent the wheel

I’m already somewhat familiar with adaptive audio in gaming, so I’m going to reach out of my comfort zone and think of similiar uses cases in other areas. What comes to mind?

With Twitch and OBS you can setup audio alerts in the ”wrong” direction. A viewer can type a command in chat to play a predetermined audio callout heard by all on the live stream.

We’ve had user specific ringtones for long before app stores. Are there also user specific voice mail for missed calls? We have Do-not-disturb scenes, usually dependant on the time.

We all get targeted commercials. Users in different countries will get different commericals showing in a break on Twitch or YouTube.

Koleston Naturals did a fine job of creating something that’s adapting to an external factor. 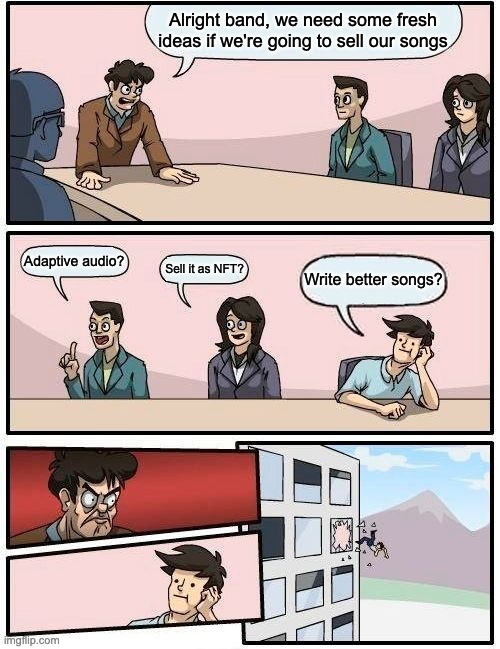 Next up: brainstorming (I hope)